Your body is made up of cells.  All over.  Your cells contain DNA inside.  All of them.

(Well, except... cells such as red blood c﻿ells which actually eject their entire nucleus containing the DNA.  At least in humans. Some animals actually have DNA in their red b﻿lood cells.  Ahhh, science; always exceptions upon exceptions.)

﻿Here is a diagram of this, if you pluck out a single skin cell.  Note the A, T, G, and C "code" that lines all of your DNA. 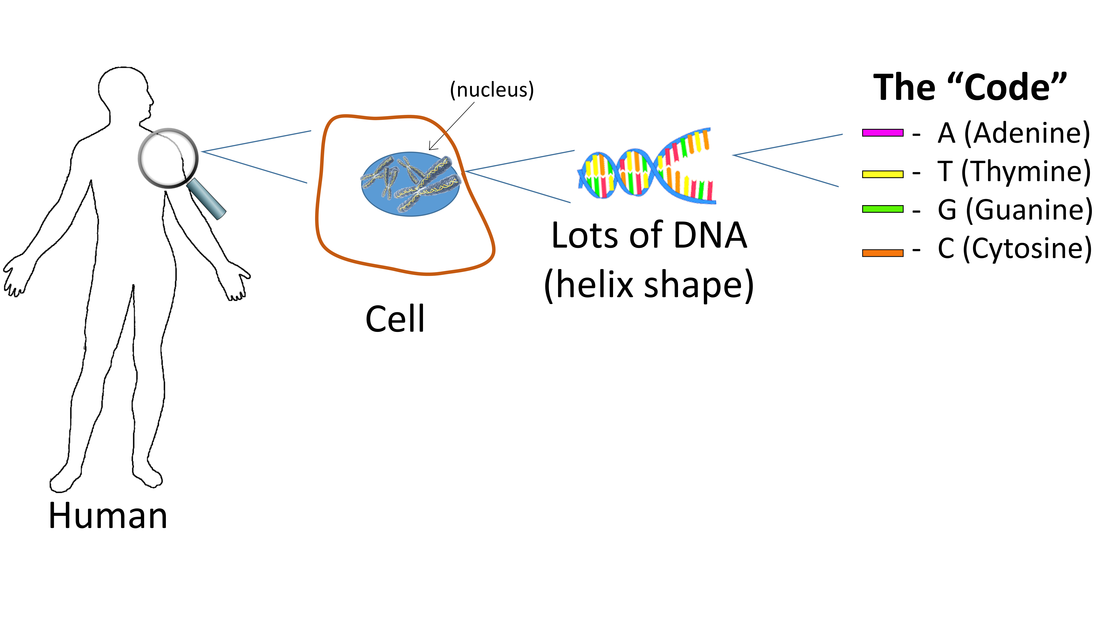 Of course, cells in your body come in different shapes and sizes, depending on their surroundings, but they basically all have the same DNA.  Here are some pictures of actual cells, lit up using different technical methods: 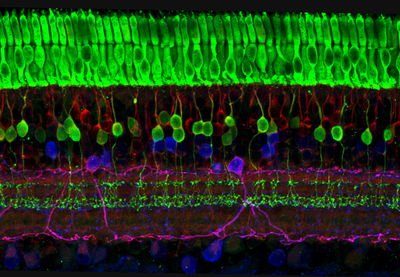 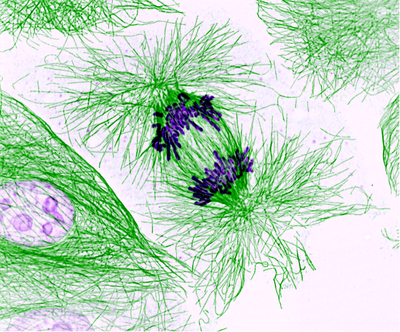 Pig Cell Dividing
So HOW can all these cells in different environments (i.e. your skin, your brain, your heart, etc.) have the same DNA?

﻿﻿(Well, except... dividing cells sometimes make slight mistakes in copying their DNA. ﻿These mistakes are called MUTATIONS.﻿ These slight changes or mutations in the DNA get passed on to future cells and the slightly changed DNA (mutated DNA) is usually not a problem, since we have over 3 Billion base pairs of DNA "code" letters.  Scientists even use mutations as a "clock" to determine a timeline between different species, which is cool.  Say, in a fictional example, a dog and a wolf have 10 different mutations when you compare their DNA but a dog and a cat have 100 different mutations.  You might rightly conclu﻿de that the dog and wolf are more closely related in ancestry than a dog and cat!   Of course, some mutations are problematic such as a mutation within a gene that signals for a cell to divide too fast, as you see in some cancer cells) ﻿﻿

Well, all your cells basically have the same DNA because they originate from a single cell.  In different environments the cells express different proteins and perform different functions (which all gets ridiculously complicated) but the different cells still all have essentially the same DNA.  This "inherited" DNA is where our interest is for optimizing personal health.

It starts at your beginning. Egg and sperm cells have only one copy of DNA.  One copy.  When they unite, those single copies fuse and the new life has two copies starting with that single new cell.  Some recombination occurs, so this is description is simplified, but one copy  »  two copies happens.  Here's what it looks like using color in place of DNA chemistry art.
So, if you are reading this, you have two copies of DNA; one from your Mother (egg single copy) and one from your Father (sperm single copy).  That first, beginning,  "two-DNA-copy"  single cell, a living fusion of the egg and sperm cells, begins dividing and growing and developing.  All the future dividing cells have two copies of that DNA (except your egg or sperm cells).  Cool.

When you de-code the DNA message, it looks like the letters on the right here:

Except, of course, your code is thousands of pages of this.  Thankfully, robotics/computers do all the de-coding work.

Some of this DNA code represents well-studied genes that can become "activated" to communicate to your cells and make proteins (via transcription to RNA and then translation to protein; go down that rabbit hole here) and some of the DNA code does not represent genes.   To further complicate things, your ability to "activate" genes can change depending on factors like diet or stress ("Epigenetics."  Read about it here).

It is estimated that you have between 20,000 to 25,000 genes (genes are certain lengths of your DNA that code for a protein) and probably about 18,000 of these are actively studied in research labs around the world.  This is excellent news for you.  When genetic researchers find a mutation (using computer software) that leads to increased (or decreased) risk for a disease, they publish these findings in scientific journals.  It does not mean a person with that mutation will have (or will not have) that disease, it just means a people with that same DNA code pattern are more likely to get it (or not get it).   Having a 10 in 1,000 chance instead of a 1 in 1,000 chance would be an example of increased risk.  These numbers could be 1 in 1 million, etc.  It varies.

At AJ Consulting Company, we use three proprietary software programs to find your increased risks; anything above a 2-fold increased risk we want you to know about.  You can often work with your doctor to change your drugs, and/or change your diet, and/or change your lifestyle to prevent or slow the progression of many diseases when you have upgraded knowledge.  In addition, other interesting information based on published scientific studies is included in your Profile (see the Example Personal DNA Profile), like genetic aspects of your personal athleticism or strength.

....continue learning:  FROM TRANSCRIPTION TO TRANSLATION